Geerthana Uthayakumar 1 Comment on “The Very Hungry Caterpillar” Birthday Party
Last May my son turned two, and when I had asked him what kind of birthday cake he wanted, he said “hungry caterpillar.” One of the very first books I bought for children was “The Very Hungry Caterpillar” by Eric Carle and both my children enjoy the book as much as I did when I was little. I loved coming up with ideas for a “The Very Hungry Caterpillar” themed simple and cost-effective birthday party. Because I like to make my own cakes I made everything myself, but if you prefer not to do it yourself, you can order one instead. However, I would encourage you to make some cupcakes or cake pops yourself because there is nothing more special than making something with your own hands for your child.
My inspiration for planning this party was these colourful dots found on the first page of the book. I incorporated these dots onto the cake and the onto wall behind the cake table.

When everything was done, this is what it looked like: 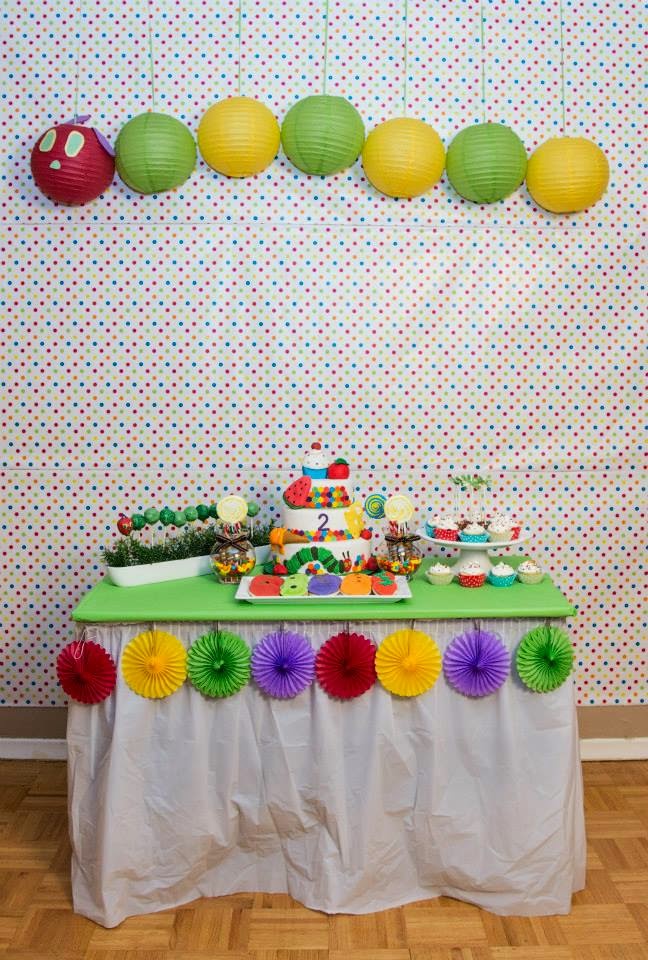 For the walls, I used three rolls of matte poka-dot wrapping paper from Wal-Mart which cost me $1.00 per roll. If you prefer to use fabric, you can buy fabrics at a fabric store such as FabricLand.
To make the caterpillar, I used paper lanterns from Party City. I used three different colours and each package of three lanterns cost $7.99. The antennae, eyes, and nose were made from construction paper. I used ribbon to hang the lanterns at different lengths to make it look like the caterpillar was crawling.
I bought plastic kiwi green table covering for $1.99 and white table skirt for $7.99, both from Party City. You can find them both at Wal-Mart too. For a more elegant look, use a fabric tablecloth and table covering.
The paper fans, also from party city were added as an accent to the table. One pack of 5 colourful fans costs $2.99. I bought two. I thought the round paper fans went well the whole poka-dot theme.
The above, are all the fruits that the very hungry caterpillar eats in the story and so I decided to make fruit shaped cookies. I also included some fruits as part of the cake design as well. The caterpillar also eats through, one cupcake, one lollipop, and one ice-cream cone, amongst other things so I included that on the cake as well. 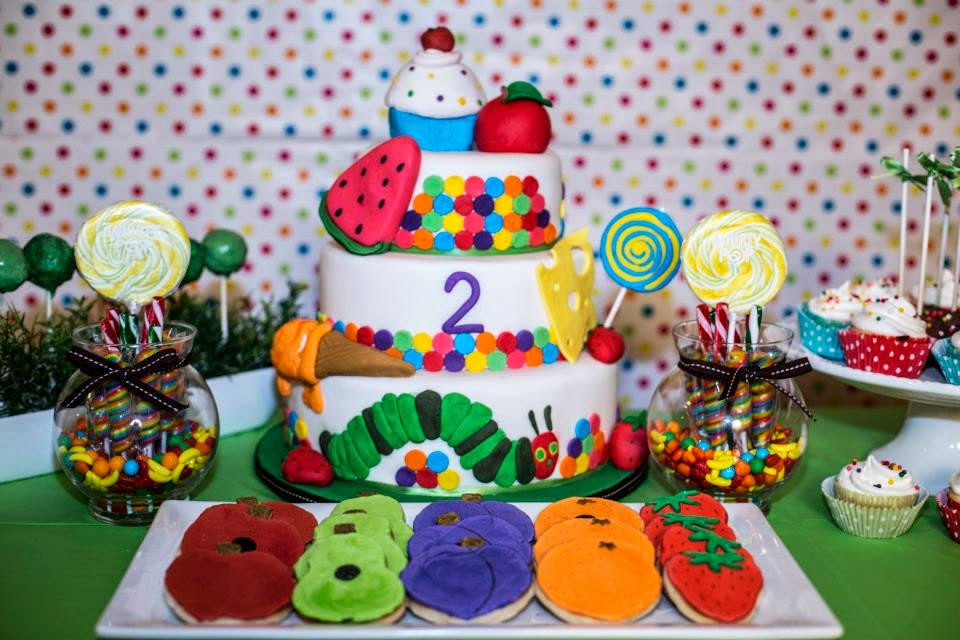 The bottom two tiers of the cake are not edible; they are dummy cakes. Dummy cakes are Styrofoam tiers that you can cover in fondant and then decorate. You can buy pre-made fondant at Bulk Barn or choose to make your own. I used Virgin Ice Fondant and it costs about $15.99 per 4 pound container. If you choose to make your own, know that it requires a lot of kneading. You can buy dummy tiers at Bulk Barn or from cake shops. Using dummy tiers are advantageous because you can decorate the tiers well ahead of time. Dummy tiers vary in price according to their size. After you are done with them you can reuse them for the future. Scrape the fondant off, wash the tier in mild soapy water, let air-dry, and then store. The top tier was real cake because that’s the tier that needs to be cut. I usually make cupcakes to serve to the guests because it is easier than having to cut cake and serve it.
The cookies are basic sugar cookies decorated in coloured royal icing. 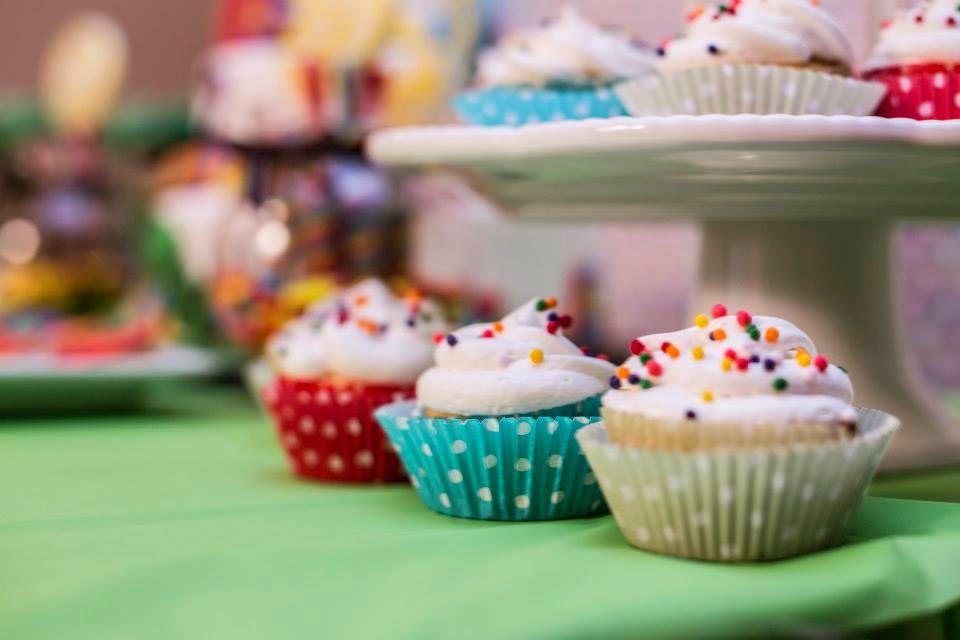 These cupcakes are just vanilla cupcakes with vanilla frosting and rainbow sprinkles that my then three year old daughter, helped me make. By adding a colourful cupcake wrapper after decorating, it gives the cupcakes a much nicer look.
I also made two candy bouquets to place on either side of the cake. To make one bouquet I needed one small vase which I bought at the dollar store for $2.00, one Whirly Pop lollipop, some candy sticks, rainbow swirl mini lollipops, fruit candy mix, and a piece of ribbon. All the candy pieces were bought from Bulk Barn. 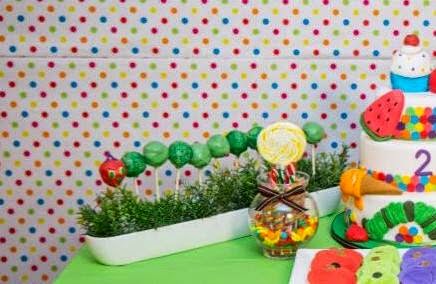 This not a very clear picture of the cake pops, but I hope you can see that using the cake pops, I created the very hungry caterpillar. The cake pops were made from a chocolate cake that I crumbed, added 1 Tbsp. of icing to, and then rolled into balls, and covered in melted candy melts after I stuck a lollipop stick into them. Candy melts can be bought at Party City or Bulk Barn. I made one red cake pop shaped like a caterpillar head and 10 green coloured cake pops for the caterpillar’s body.  I used a breadstick platter filled with clay and stuck the cake pops into the clay at different heights. Then I added some green plastic leaves from the dollar store to make it look like the caterpillar was crawling on grass. This was my son’s favourite part of the cake table. 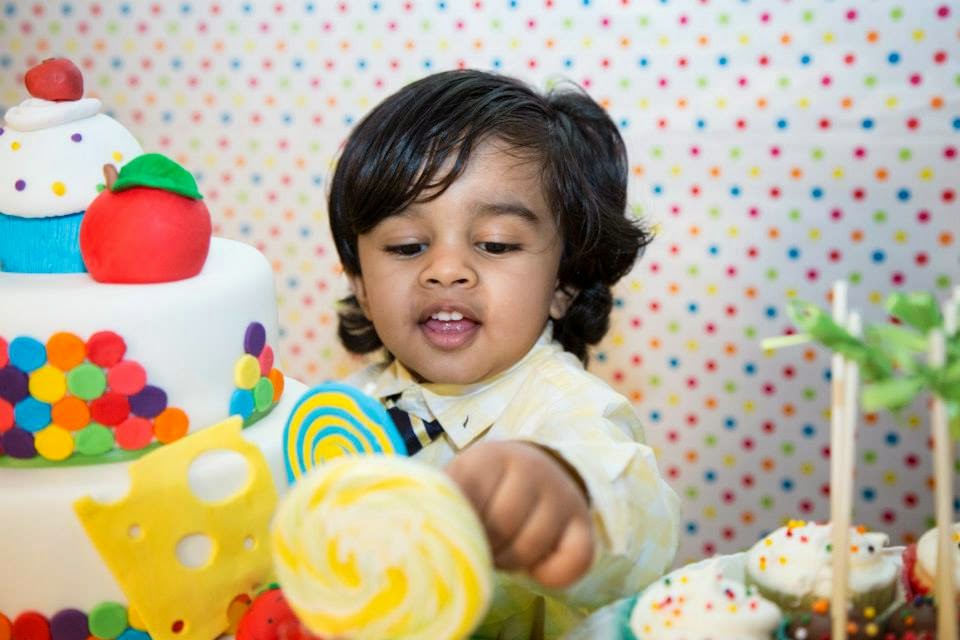 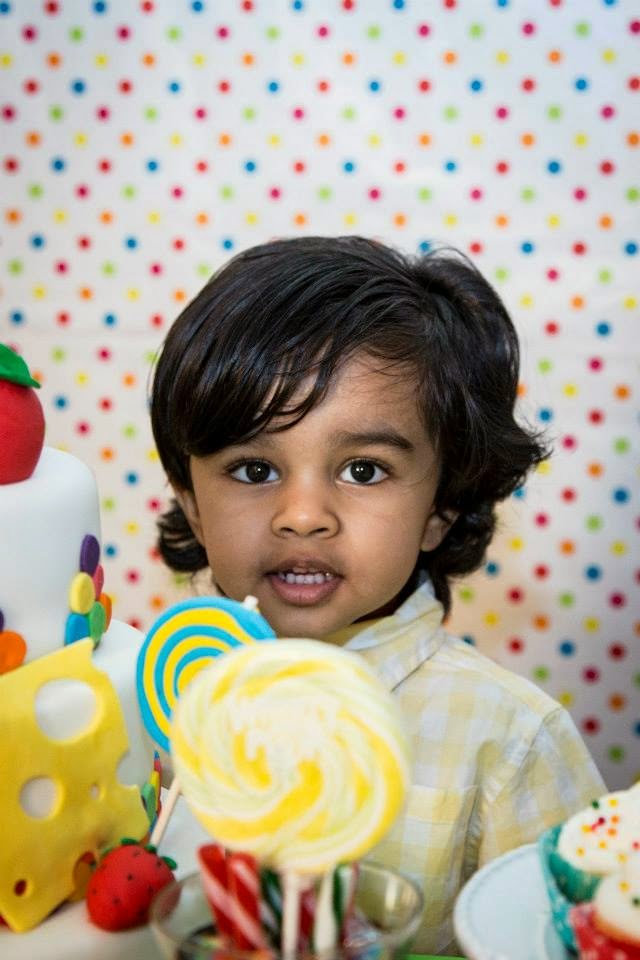 When my son woke up and came to see the cake table that his father and I had prepared the night before, his eyes lit up. Needless to say, he had an amazing time at his birthday party. All the above photographs were taken by Prath from Scorpio Pictures.
birthday party

Initially I had taken a much needed seven week hia